Vaccine Information Base is Contaminated by Fake Claims

Below, we post the published critical commentary by our colleague John Stone of Age of Autism, on the UK Data.Parliament website. In his commentary, Mr. Stone refutes (“debunks”) the rationale for expanding the already inflated childhood vaccination schedule by adding a vaccine against antimicrobial resistance. Whereas those with a financial stake in expanding the vaccination schedule resort to repeating the preposterous claim about the resilience of an infant, a claim invented by Dr. Paul Offit (who has made tens of millions of dollars from vaccine patents and from his promotional activities), Mr. Stone substantiates his argument with hard evidence! 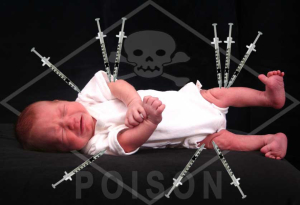 Dr. Offit’s preposterous claim – that an infant’s immune system can easily tolerate as many as 10,000 or 100,000 vaccines administered in one visit – has been passed on to government policy makers as if it were legitimate.

Of course any intelligent person who is not invested in the business of vaccines, would likely dismiss that claim as irresponsible – especially coming from an influential physician who has made tens of millions of dollars from his promotional activities and patent royalties. [See, the Alliance for Human Research Protection, Predatory Propagandists: Cyber Weapons of Mass Deception.

John Stone also filed a Freedom of Information request to Department of Health and Social Care,requesting a response as to whether the DHS advice to the government and/or members of Parliament to expand the children’s vaccine schedule relied on Dr. Offit’s untenable claim.

Written Evidence on Vaccination from John Stone on Data.Parliament.UK
Below is a published “written evidence” from AofA’s John Stone at data.parliament.uk.

Data.parliament (DDP) is a platform that enables us to share our data both within and outside of Parliament. The aim of data.parliament is to ensure that our data is both accessible and useable. Most of the data is already public, but this project is about ensuring that it is exposed in a better and richer way. It’s a big project, and the service will continue to develop and grow after the platform has launched.  In time, we hope that all published Parliamentary information will be available on DDP.

[1] Vaccines are mentioned as one strategy against antimicrobial resistance (1) and this submission seeks to caution against the idea of substituting one kind of over-medication with another (Age of Autism is an on-line newspaper concerned with the publicly unaccounted adverse effects of vaccination).

[2] In the United Kingdom, an infant already receives by 12 months on the routine schedule (2):-

“The infant mortality rate (IMR) is one of the most important indicators of the socio-economic well-being and public health conditions of a country. The US childhood immunization schedule specifies 26 vaccine doses for infants aged less than 1 year—the most in the world—yet 33 nations have lower IMRs. Using linear regression, the immunization schedules of these 34 nations were examined and a correlation coefficient of r = 0.70 (p < 0.0001) was found between IMRs and the number of vaccine doses routinely given to infants. Nations were also grouped into five different vaccine dose ranges: 12–14, 15–17, 18–20, 21–23, and 24–26. The mean IMRs of all nations within each group were then calculated. Linear regression analysis of unweighted mean IMRs showed a high statistically significant correlation between increasing number of vaccine doses and increasing infant mortality rates, with r = 0.992 (p = 0.0009). Using the Tukey-Kramer test, statistically significant differences in mean IMRs were found between nations giving 12–14 vaccine doses and those giving 21–23, and 24–26 doses. A closer inspection of correlations between vaccine doses, biochemical or synergistic toxicity, and IMRs is essential.”

[4] There is presently no hard science supporting the general expandability of the programme and its safety despite several hundreds of products in the pipeline (4) all waiting to be licensed, recommended and in many other countries mandated. Often in the last decade, and even quite recently British health officials (including Prof David Salisbury (5), Sir Liam Donaldson (6) and Prof Elizabeth Miller (7)) were apt to cite the 10,000 vaccine doctrine of Prof Paul Offit (8) in order to reassure the public. There were several obvious things wrong with Offit’s claim that 10,000 or 100,000 vaccines administered to an infant in one go might be safe. Offit was comparing routine exposure to environmental pathogens, with cocktails of serious disease derived pathogens; it took no account, for example, of the use of adjuvants to boost the antigens and the route of administration was nothing like routine exposure to pathogens in the environment i.e. in most cases injected when normally we have skin, the digestive system, the lungs which have evolved to protect us (9).

[5] Last year I was attacked by the Every Child By Two website (10), to which Offit is an advisor (11) and executive member (12), for suggesting he ever meant it literally (despite copious evidence (9, 13)), so the doctrinal/theoretical basis for the safety of the expanding programme seems to have evaporated, without it being replaced by anything else.

[6] The can be no assumption that vaccines boost general resistance, and publications from the team led by Aaby and Benn suggest negative possibilities (14, 15, 16).

[7] Recent studies have questioned whether pneumococcal vaccines actually result in a reduction of pneumococcal illness, or make the problem worse. For instance, Vila-Corcoles reported in a study of more than 2m middle-aged and elderly adults in Catalonia (17):

[8] In Mawson’s small but ground-breaking vaccinated vs. unvaccinated study of home-schooled children (18) it was found that 1.2% of unvaccinated children had had pneumonia against 6.4% vaccinated, while 5.8% unvaccinated had had Otitis Media against 19.8 vaccinated. However unpalatable it is to health officials and vaccine manufacturers it is urgent that this study – which looked at the effects of general vaccination against a range of health outcomes – be expanded.

[9] Vaccines may offer no panacea to the problem of antimicrobial resistance, will interact with it in unpredictable ways, and likely make it worse. Politicians need to be wary of being railroaded by industry objectives which are a matter of commercial exploitation and not the public good.

(3)    Miller NZ & Goldman GS, Infant mortality rates regressed against number of vaccine doses routinely given: Is there a biochemical or synergistic toxicity?, Human and Experimental Toxicology May 2011, http://journals.sagepub.com/doi/10.1177/0960327111407644

(7)    Elizabeth Miller, Controversies and challenges of vaccination: an interview with Elizabeth Miller, BMC Med. 2015; 13: 267.
https://www.ncbi.nlm.nih.gov/pmc/articles/PMC4608187/
Miller can make a rhetorical defence: “Despite strong arguments against the overload hypothesis…” but of course an argument is not evidence. The citation is to the Offit article.

(10) Joel A Harrison, John Stone and the “Best of Age of Autism”: Just Plain Wrong About Everything, 27 February 2017
http://www.ecbt.org/index.php/facts_and_issues/article/john_stone_and_the_best_of_age_of_autism_just_plain_wrong_about_everything

(13) For instance, a newsletter from Offit’s hospital Children’s Hospital of Philadelphia (CHOP) states: “No doubt about it, the immunization schedule recommended by the Centers for Disease Control and Prevention and the American Academy of Pediatrics (AAP) can seem daunting. Your child can receive up to 23 shots by the time she’s 2 years old and as many as six shots at a single doctor visit. So it’s not surprising that many parents have concerns about how vaccines might affect a child’s developing immunity and often cite these as a reason to refuse a vaccine….But it should be the least of your worries.

“Children have an enormous capacity to respond safely to challenges to the immune system from vaccines,” says Dr. Offit. “A baby’s body is bombarded with immunologic challenges – from bacteria in food to the dust they breathe. Compared to what they typically encounter and manage during the day, vaccines are literally a drop in the ocean.”
In fact, Dr. Offit’s studies show that in theory, healthy infants could safely get up to 100,000 vaccines at once.”
https://web.archive.org/web/20060907100428/http://www.chop.edu/consumer/jsp/division/generic.jsp?id=81553