Vaccine Mandates Are an Abuse of Power: They Have Nothing to do with Public Health

Mass Covid vaccination campaigns worldwide rely on the concealment of the growing body of evidence. The evidence contradicts the claimed safety, health benefits & protection from Infection.

A US federal court rejected FDA’s refusal to disclose Pfizer’s report documenting Covid vaccine safety data. The request was made under the Freedom of Information Act by Public Health and Medical Professionals for Transparency, representing 30 professors and scientists. The first batch of data contained Pfizer’s data from December 1, 2020 to February 28, 2021.

The largest number of severe adverse reactions was recorded in the United States (13,739); and the UK (13,404). Women were more than three times more likely to experience a severe reaction than men: 29,914 compared to 9,182. *These reports only include serious cases.[1]

In its report submitted to the FDA in July, Pfizer reported 26 deaths during its Comirnaty trial — from Dec. 2020 through Feb 28, 2021: 15 deaths in the Comirnaty group and 11 in the placebo group. FDA granted marketing approved of Comirnaty. Based on this report, FDA approved Pfizer’s Cormirnaty vaccine in August 2021. That approval was shown to be a sham to confuse the public into believing that the BioNTech injections that they were receiving had been given FDA approval.[3]

On Nov 8th the FDA released Pfizer’s updated report after ordered by a federal court. The report is based on the same data and cut-off date – March 1, 2021 — as its July submission to the FDA.

However, on p.28 Pfizer revised its reported number of deaths; acknowledging 38 reported deaths during the trial; 21 deaths occurred in the Comirnaty group, and 17 deaths in the placebo group. That is a very substantial 24% increased mortality rate.[4]

FDA officials, who have known about the deaths and serious risks, continue to misrepresent the vaccines to the public as “safe and effective” pressuring millions of Americans and billions of people around the globe to get the shots whose deadly risks are concealed.

The report that the FDA disclosed redacted a major ingredient in the injections identified only as: (b) (4). Why did FDA redact this information? What is that ingredient that is being injected in billions of people that Pfizer wants to keep secret?

After submitting the first batch of documents, FDA officials then sought to bury the bulk of the safety information. They requested a federal judge to give the agency 55 years — until 2076—to process the FOIA request.

“It was exactly 108 days for the FDA from the time Pfizer started releasing the licensing records to the time the FDA licensed the Pfizer vaccine. Taking the FDA’s word for it, it has conducted an intensive, reliable, thorough and complete review and analysis of these documents to ensure that Pfizer’s vaccine is safe and effective for licensing. While it can do a thorough review of Pfizer documents in 108 days, it now takes more than 20,000 days to make those documents publicly available.”

Additional Pfizer documents can be downloaded on the website of Public Health and Medical Professionals for Transparency Documents: https://phmpt.org/pfizers-documents/

Failing to persuade their more informed citizens to get the experimental Covid injections, government officials in Germany & Austria reverted to their former Fascist methods of persuasion. They issued vaccination mandates and ordered punishing lockdowns.

Ursula von Der Leyen, a German politician and licensed physician, is the current Chief of the European Union Commission. On Wednesday she urged the 27 heads of government of the EU to follow the German-Austrian example and seriously consider mandating Covid vaccines for everyone.

Von Der Leyen indicated that 150 million people in EU were unvaccinated. She misrepresented the safety of the experimental injections and claimed that it posed “an enormous health cost.” Either she is ignorant about the extraordinary high number of deaths and serious harm suffered by people following the injections, or she does not care about harm.

Lawyers, doctors, scientists and Holocaust survivors are calling for a Nuremberg Trial 2. https://thewhiterose.uk/dr-richard-flemming-calls-for-a-nuremberg-trial-2-0/ 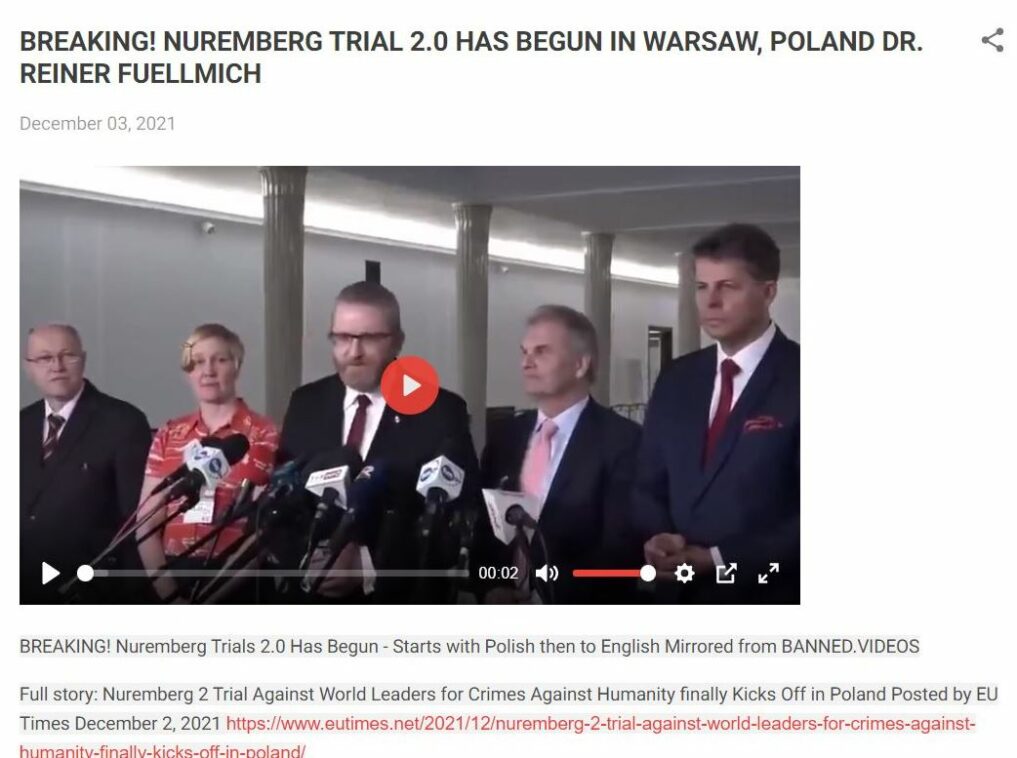 [3] FDA ‘playing bait and switch’ with Americans, tricking them into believing shots currently being offered have been granted full approval when they have not.

[4] This Is What Makes Reasonable People Cry Foul, Conspiracy And Crime!!!

“Here we will have to really think medical-legal. Why medical-legal? Because [despite] quite a few adverse events END_OF_DOCUMENT_TOKEN_TO_BE_REPLACED