“Since 1990, autism rates have exploded: something new and terrible is happening to a generation of children. It’s time for the CDC stop sugar coating the inconvenient facts and confess that we have a national emergency so we can finally get to the bottom of this tragic problem.”
(Mark Blaxill, Health Choice, 2016)

Yet, any doctor, scientist, public official or public celebrity who expresses the view that the emergence of autism is linked to vaccines, touches the electrically charged “third rail” in public health; he or she will be excoriated for suggesting such a heresy. Vaccine damaged children are at the center of an acrimonious controversy that pits parents against the medical / corporate enterprise has been raging since the 1990s when the rise in the documented number of autistic children was indisputable.

Despite the empirical evidence, the U.S. Center for Disease Control & Prevention (CDC) continues to stand firmly with the pharmaceutical industry, dismissing concerns about the role of vaccines in autism, by providing “scientific authority” to the unyielding mantra which disregards the human casualties as though they were “statistically insignificant.” CDC’s website continually proclaims: “Autism spectrum disorder is a developmental disability that is caused by differences in how the brain functions. Vaccines Do Not Cause Autism. There is no link between vaccines and autism. Vaccine ingredients do not cause autism.”

But there are medical doctors who disagree; they have have examined the evidence, and some have treated brain-damaged children following vaccination.

March 29, 2016: In the UK Dr. Peter Fletcher, the former Chief Scientific Officer at the Department of Health who was responsible for determining whether medicines were safe, accused the government of “utterly irresponsible complacency” over the MMR triple vaccine for children. He first expressed concerns about the MMR in 2001; now he says “the theoretical fears he raised appear to be becoming reality.”

“Clinical and scientific data is steadily accumulating that the live measles virus in MMR can cause brain, gut and immune system damage in a subset of vulnerable children. When vaccine damage in very young children is involved, it is harder to prove the links.

But it is the steady accumulation of evidence, from a number of respected universities, teaching hospitals and laboratories around the world that matters here. There’s far too much to ignore. Yet government health authorities are, it seems, more than happy to do so.

But there are very powerful people in positions of great authority in Britain and elsewhere who have staked their reputations and careers on the safety of MMR and they are willing to do almost anything to protect themselves.”” (Peter Fletcher MD, former Chief Scientific Officer, Department of Health, United Kingdom, Daily Mail, March 29, 2016)

The documentary film VAXXED: From Cover-Up to Catastrophe, lays bare documented evidence of catastrophic vaccine hazards—in particular the 350% increased risk of autism for African American baby boys – that CDC had deliberately concealed from doctors, parents, and the public.

The film exposes fraud, deception and the destruction of vaccine safety data by scientists at the Centers for Disease Control and Prevention (CDC). It presents buried scientific evidence that shatters the insistence by the pharmaceutical influenced public health establishment – aided and abetted by the “authoritative” CDC – that the MMR vaccine is “safe and effective” and that “scientific evidence” proves that there is no link between autism and vaccines.

The film presents the testimony of a senior scientist at the Center for Disease Control who relates how government scientists engaged in criminal acts to bury “scientific evidence” that threatens the financial interest of the pharmaceutical industry and public health policies. In a letter dated February 2, 2004, Dr. William Thompson, CDC Senior Epidemiologist, urged CDC director, Dr. Julie Gerberding reminded her that Congressman David Weldon “is still waiting for a response from you regarding issues surrounding the integrity of your scientists in the National Immunization Program.”

“I’m sure you’re aware of the Institute of Medicine Meeting regarding vaccines and autism that will take place on Feb. 9th. I will be presenting the summary of our results from the Metropolitan Atlanta Autism Case-Control Study and I will have to present several problematic results relating to statistical associations between the receipt of MMR vaccine and autism.”

In response, Dr. Gerberding re-assigned the presentation before the IOM to another CDC scientist who did not disclose the “problematic safety

results.”  In 2007, CDC announced that the rate of autism rose to 1 in 500. Despite her knowledge that CDC’s own epidemiological study found evidence – i.e., “statistical associations between receipt of MMR vaccine and autism,” Dr. Julie Gerberding, then CDC Director, stated: “Our estimates are becoming better and more consistent, though we can’t tell yet if there is a true increase in ASD [Autism Spectrum Disease] or if the changes are the result of our better studies.”

The documents show that CDC has concealed the data showing the link of the MMR vaccine to autism from CDC’s own study. CDC concealed the scientific findings of a significant risk for baby boys — in particular African American baby boys — from doctors, from parents, from public health officials, and from the public.

In November 2015, CDC announced that the autism prevalence rate had soared to 1 in 45 children.
“The number of autism cases in the United States appeared to jump dramatically in 2014 according to new CDC estimates released Friday, but researchers said that changes in the format of the questionnaire likely affected the numbers…the prevalence of autism in children ages 3 to 17 went up about 80 percent from 2011-2013 to 2014. Instead of 1 in 80 (or 1.25 percent) children having autism — a number that has alarmed public health officials in recent years and strained state and school system resources — researchers now estimate that the prevalence is now 1 in 45 (or 2.24 percent).” (The Washington Post)

Instead of demands for emergency public hearings and an impartial data analysis to get to the truth about the cause of this catastrophic epidemic affecting tens of thousands of children, the media focused on a measles outbreak in Disneyland which the media blamed on parents who refused the vaccine for their children!

Dr. Thompson’s testimony and irrefutable documentation is the catalyst for the documentary film  VAXXED: From Cover-Up to Catastrophe.
This senior CDC scientist blew the whistle in 2014 in response to a Freedom of Information request by Dr. Brian Hooker, a biologist, and father of an autistic son. Dr. Thompson provided documentation showing that the CDC has known for at least 14 years that the scheduled measles, mumps, rubella (MMR) vaccine is the cause of a catastrophe. A catastrophe that CDC has steadfastly denied.

The film was written and directed by Dr. Andrew Wakefield and produced by Del Bigtree. The film presents Dr. Thompson recorded confession in which he describes in detail how the data was manipulated to conceal the actual findings in that published version of the study. CDC officials  have intentionally suppressed the truth, concealed and misrepresented the evidence that CDC’s own scientists had documented. CDC is shown to have perpetuating a lie when it assured the public that there is no evidence of a link between autism and vaccines.

Vaxxed presents numerous heartbreaking videos of babies and children before and after vaccination and several articulate parents. An African American mother of twins describes how she saved her daughter after her son was vaccinated with the MMR. Her unvaccinated daughter is a gifted high achiever who speaks 3 languages and is a classical musician. Almost immediately after her was vaccinated he suffered profound developmental damage.

One of the experts in the film, Dr. Stephanie Seneff a senior scientist at MIT, has projected that at the current exponential rate of autism, by the year 2025, the rate will reach 1 in 2 boys. [The culprits are: the herbicide glyphosate and vaccine ingredients, aluminum, glutamate, MSG.]

By raising legitimate questions about the integrity of the MMR science, the film poses a threat to CDC’s vaccination schedule and to corporate interests and profits.

Before the documentary film was ever released, orchestrated media frenzy was unleashed in an effort to prevent its screening after it was selected to be shown at the Tribeca Film Festival in New York City. Within a 72 hour period, the mainstream media issued a barrage of condemnations in a concerted effort at censorship “to protect the guilty and demonize a messenger of warning, the film’s director Dr. Andrew Wakefield.” His career as a doctor was destroyed by a disciplinary panel of the British Medical Council, whose procedure was later severely criticized by Justice John Mitting of the High Court of England. Even as he is vilified, Dr. Wakefield has continued to document evidence of children who have suffered profound neurological damage following MMR vaccination. He refuses to be bullied into silence.

When it was announced that Vaxxed was to be screened at the Tribeca Film Festival – as if on command—the mainstream media delivered a barrage of vitriolic attacks against Robert De Niro, the festival’s co-founder. The attacks by ABC, CNN and MSNBC, the UK’s Guardian, Time Magazine, the Washington Post, the LA Times, the New York Times, The Wall Street Journal, Forbes, Vanity Fair, Vogue, Rolling Stone, Variety and many others were delivered a uniform message; vilifying Dr. Wakefield as a dangerous influence who must be silenced. The reporters and broadcasters of the major media, who had not seen the film, appeared to follow a script; they used the same phrases, quotes and sequence in their statements.

“What responsible reporter, with any degree of journalistic integrity, would judge a film based upon a three minute trailer? … It should be comforting to know that all of these publications and news bureaus are on the ready to report simultaneously en masse as this story develops.” (Why is the CDC Petrified of the Film Vaxxed?)

The film’s producer, Del Bigtree, a science journalist, and Emmy award winner who directed/produced The Doctors/ CBS from 2008 to 2015. He left CBS to produce Vaxxed, which he recognized as “the biggest story of my career.” See the uncut ABC interview with Del Bigtree.

The film had its premiere on April 1 at the Angelica Film Center in New York where I saw it and can attest that it is not anti-science or anti- all vaccination.  Vaxxed is a riveting, calmly presented, compelling documentary film that exposes the CDC as a corrupt agency; and exposes the media as an obliging pack of hound dogs. 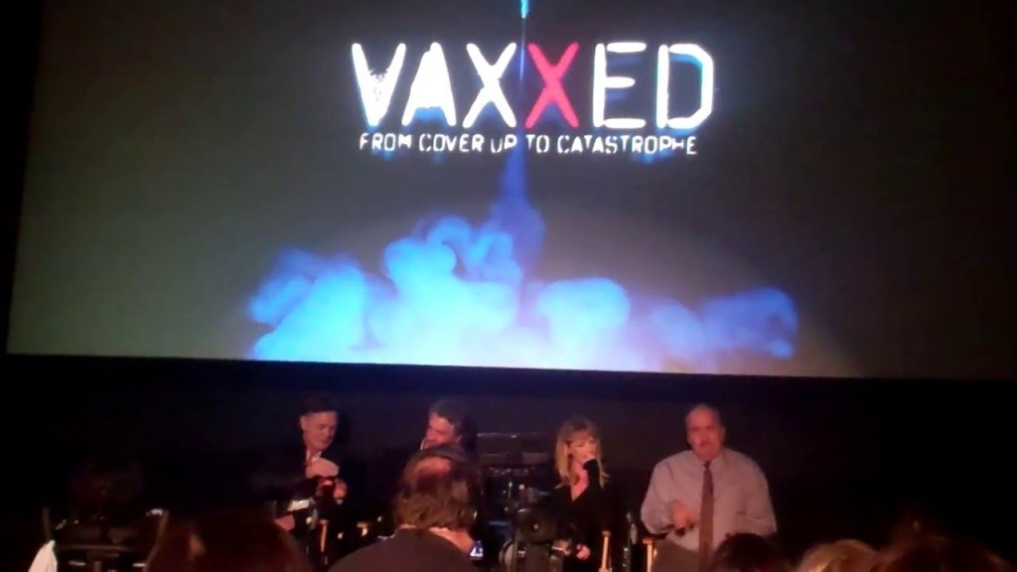 Discussion Following Premiere Screening of Vaxxed: From Cover-Up to Catastrophe

In the film, Dr. Wakefield recommends splitting the three-in one MMR vaccine to its individual vaccine components – like Japan does – and delaying its administration until the age of three. Four other recommendations the film makes:

“We chose to distribute this film to correct a major issue, which is the suppression of medical data by a governmental agency that may very well be contributing to a significant health crisis. The media storm of last week also revealed another issue; the hyper mediatization by some members of the media and the documentary community who had not even seen the film, as well as Tribeca executives, which condemned it as anti-vaccine.”