“The government hires scientists to support its policies; industry hires them to support its business; and universities hire them to bring in grants that are handed out to support government policies and industry practices… The greatest threat of all is the purposeful corruption of the scientific enterprise by the institutions themselves. The science they create is often only an illusion, designed to deceive; and the scientists they destroy to protect that illusion are often our best.” (Dr. David Lewis. Science for Sale: How the US Government Uses Powerful Corporations and Leading Universities to Support Government Policies, Silence Top Scientists, Jeopardize Our Health, and Protect Corporate Profit (2014) 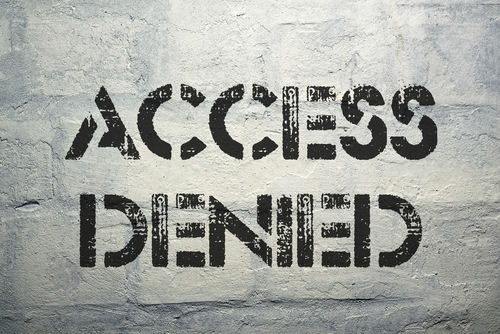 An article by Peter Doshi in the current issue of The Scientist reveals that the Centers for Disease Control (CDC) is blocking  internet access on its website to the vaccine adverse effect reports (VAERS). In 2015, the latest data about the adjudicated cases from the National Vaccine Injury Compensation Program disappeared fro the website. (Read Government Wipes Recent Vaccine Injury Data from Website by investigative journalist Sharyl Attkisson)

These examples demonstrate the measures CDC has taken to suppress vital information from the public; in an effort to uphold vaccine orthodoxy– i.e., “vaccines are safe and effective” — and to ensure compliance with CDC Childhood Vaccination Schedule. Great effort goes into reinforcing vaccine orthodoxy — “Vaccines are safe and effective”—while burying evidence that lend validity to parents’ concerns about vaccine safety.

[1] An example of institutional deception is the rigged “pharmacovigilance” HPV safety review by the European Medicines Agency (EMA). The EMA, in collusion with the HPV vaccine manufacturers, disregarded numerous clustered reports of emergent serious medical syndromes (CRPS and POTS) following HPV vaccination. A critical review of the internal documents pertaining to the EMA evaluation process, by Dr. Tom Jefferson and Dr. Lars Jørgensen suggests that “the outcome of the EMA’s review process was decided prior to its initiation.” (Indian Journal of Medical Ethics, 2017).

[2] Two peer reviewed reports about a pilot comparative breakthrough watershed study of vaccinated and unvaccinated 6- to 12-year old U.S. children by a team of researchers led by epidemiologist Anthony Mawson, Jackson State University. The reports were published online in the Journal of Translational Science (2017) and abruptly removed – without explanation. [Both papers are posted on the AHRP website and also at Research Gate]

[3] A CDC report published in the journal Vaccine (2015): “Intussusception after monovalent rotavirus vaccine-United States, Vaccine Adverse Event Reporting System (VAERS), 2008-2014” focuses on the two rotavirus vaccines — Merck’s RotaTeq (RV5) and GSK’s, Rotatrix (RV1). Merck’s vaccine, favored by the CDC, is given to infants at 2 and 4 months in the US; GSK’s vaccine is given in the UK at 2 and 3 months.

The CDC authors reported that there were 108 confirmed intussusception reports (a serious intestinal obstruction secondary to the inversion of one portion of the intestine within another) associated with Rotatrix clustering on 3-8 days after the first dose; and 2-7 days after the second dose. The authors claimed that the excess risk, 1.6 per 100,000, “is outweighed by the benefits of rotavirus vaccination.” 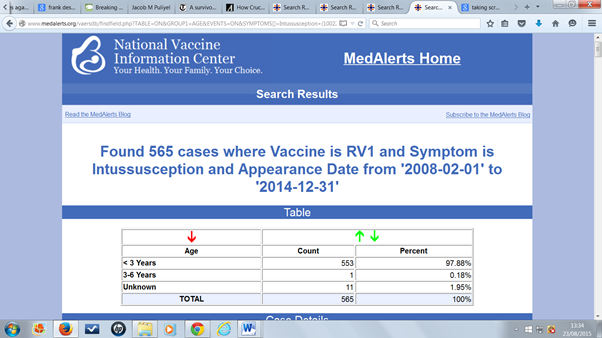 However, a careful review of the VAERS database reveals that there were 565 reported cases of intussusception during that period for the Rotatrix vaccine. That is an 80% understatement by the “authoritative” CDC report whose lead author, Frank DeStefano,* is CDC’s Director of Immunization and Safety. The report states that by April 2012, there were 584 intussusception reports linked to Merck’s RotaTeq.  In fact the VAERS database lists 812 cases. Furthermore, the CDC report fails to mention that there were 18 deaths – 13 attributed to GSK’s oral vaccine Rotatrix and 6 deaths attributed to Merck’s RotaTeq. (Read the analysis accompanied by VAERS web screen shots, by John Stone, editor of Age of Autism)

[An important caveat: the VAERS database is a passive reporting system. It is estimated that VAERS only includes 1 to 2% of actual adverse vaccine effects.]

Both current rotavirus vaccines have been withdrawn by the French government in May 2015 following reports of 47 infants developing intussusception — including 14 surgical interventions and two deaths. In Germany, 82 reports of confirmed instussusception; twelve requiring part of the intestine to be removed.  The CDC favors Merck’s RotaTeq vaccine which was developed by Dr. Paul Offitt who is the major vaccine promoter in the US, refuses to disclose the millions of dollars in profits that he has garnered from the vaccine.

[4] The Cochrane Collaboration review (2012) of the measles, mumps, rubella (MMR) vaccine safety literature acknowledged that the studies were corrupted by bias. The reviewers acknowledged that “none” of the studies upon which the safety of the MMR vaccine rests met the Cochrane’s criteria – all are biased. What the Cochrane reviewers didn’t address is why a vaccine that has been marketed since 1971 lacks proper methodological safety studies – especially in view of the intense acrimonious controversy surrounding the vaccine, and increasing public distrust.

An analysis of the cumulative incidence of autistic disorder
An analysis during a 10-year period (1987 – 1996) published in Environmental Science & Technology (2010) identified a sharp “changepoint” year (1988) when the incidence of autism sharply increased. That “changepoint” year is the year that childhood vaccination schedules were greatly expanded. Shouldn’t that disturbing correlation be worthy of serious investigation to determine IF there is a causal link? After all, there is no such thing as a genetic epidemic!

The fact is, that legitimate research that seeks to determine the safety (and to identify the hazards) of the MMR (or any vaccine), is impeded by powerful interest groups who claim to have a monopoly on vaccine science. But lacking answers as to the triggers/causes behind the spiraling rise of developmental disorders – including autism spectrum – the response given by reigning medical “authorities” is to close ranks and declare that the science is “settled.” The vaccine-autism debate is “over;” and we should “close the door for good.”

A repressive institutional effort has effectively marginalized and delegitimized – though not quite extinguished – relevant avenues of vaccine safety research.

The agents in this repressive effort belong to a web of collaborating partnerships between vaccine manufacturers, government regulators, academic and professional medical associations, and especially, the high impact, major medical information gatekeepers – the financially dependent journals and media. They deny the existence of a sizable body of research that has identified neurotoxic ingredients in vaccines that are believed to trigger inflammation and autoimmunity. And deny research that suggests an increased cumulative toxic effect from the CDC- recommended Childhood Vaccination Schedule.

Studies that lend validity to safety concerns about the vaccination schedule are regarded as posing an intolerable threat. They are a threat because any reassessment of the vaccination schedule would likely reduce the number of recommended vaccines and, hence, would reduce the profit margins for vaccine manufacturers; and would threaten the financial support that academic “partnerships” have come to rely on.  So, whenever a study challenges vaccine orthodoxy – i.e., “vaccines are safe and effective” – that study is ignored, dismissed, or derided; its authors are disparaged, or attacked as “anti-vax hacks.”

In his recent article in the Journal o Clinical Epidemiology (2017) Dr. Giovanni Fava, confronts a flaw in what passes as “evidence-based medicine” (EBM) whose research methods tend toward reductionism, is much favored by industry and public health officials. Clinical judgment and patient-doctor interaction are side-lined .

“Evidence-based medicine drives the prescribing clinician to an overestimated consideration of potential benefits, paying little attention to the likelihood of responsiveness and to potential vulnerabilities in relations to the adverse effects of treatment... One route was to perform comparisons by meta-analytic methods that are liable to manipulation instead of head-to head comparisons.“

Those who are concerned about vaccine safety have been arguing to no avail for decades that head to head research protocols are need to compare the health outcomes between vaccinated and unvaccinated groups of children.

A result of such suppression of vaccine safety research is that there is no credible, “evidence-based” reasoned risk/benefit analysis validating the safety of government-recommended /mandated childhood vaccination schedules. Neither the selection, the bundled multiple vaccines administered simultaneously, nor the timing in which they are given have been validated as safe. (Is the Timing of Recommended Childhood Vaccines Evidence-Based?  Dr. Tom Jefferson and Dr. Vittorio Demicheli, BMJ, 2016)