WHO eliminated death as a consequence of pentavalent vaccine; UK seeks to mandate vaccines

FYI
Vaccine regulators are bent on eliminating whatever vestiges of protection might still be in existence. The UK Independent reports that the British Medical Association is calling for evidence to be submitted to the UK Government on:  “the potential advantages and disadvantages of childhood immunisation made mandatory under the law”. 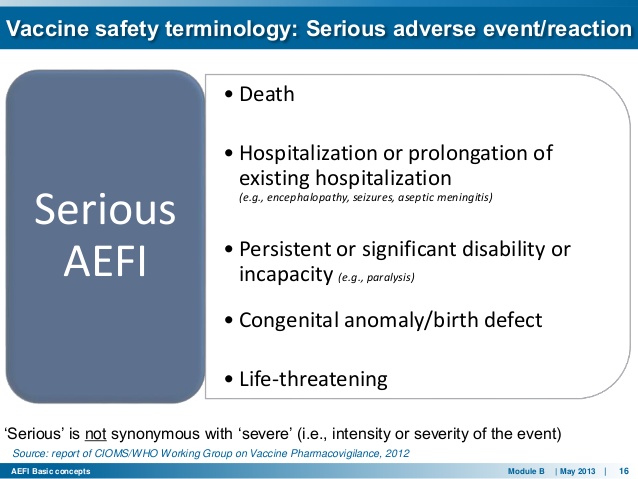 Hardly anyone in the Western world noticed that the WHO revised the AEFI manual in 2013 eliminating  DEATH as a risk from the pentavalent — 5 in 1–vaccine.

The pentavalent vaccine is used in Third World countries: India and all countries supported by the GAVI Alliance:

But clearly, such a load of virus/ bacteria exposure all at once, may also pose increased risk for some babies. The WHO circumvented the most serious risk – i.e., deaths that have been occurred following vaccination with the pentavalent vaccine: the WHO eliminated death as a possible consequence of the pentavalent vaccine.

In a letter published July 4, 2017, Dr. Jacob Puliyel,* a pediatrician and member of the National Technical Advisory Group on Immunization, and Anant Phadke, an executive member of the All India Drug Action Network argue that WHO’s methodology does not address children’s safety. They point out that:

“The resulting paradox is evident. If a child is admitted to hospital with intractable convulsions after vaccination, if it survives, the reaction could be classified as vaccine-product–related, but if it dies it will be classified as ‘coincidental death’”.

*Dr. Puliyel is a distinguished member of the AHRP Honors Roll

WHO ADVISED TO REVISE ITS POST-VACCINATION PHILOSOPHY   New Delhi 4 July 2017.

Jacob Puliyel, a pediatrician and member of the National Technical Advisory Group on Immunization, and Anant Phadke, an executive member of the All India Drug Action Network argue that WHO’s methodology does not address children’s safety.

According to the  authors, WHO’s new classification of  AEFI, in essence, implies that no death can result from  vaccination and, if any death does occur, it is only coincidental and not due to the vaccine.

Only reactions that have been previously acknowledged in epidemiological studies can be considered as vaccine related in the new scheme.  All deaths   seen in   large post marketing phase are simply labeled as coincidental   or unclassifiable deaths. They cannot be classified as vaccine related if the vaccine had not caused a statistically significant increase in deaths in the small Phase 3 trials.

In a letter published in the prestigious Indian Journal of Medical Ethics, Puliyel and Phadke have expressed their concerns over this new classification system. “By simply denying deaths, the new AEFI classification is liable to miss the safety signals and therefore potential dangers with new vaccines.”

They note that Sri Lanka suspended the use of a pentavalent vaccine after five deaths within four months after its introduction in January 2008 and, in 2013 and Viet Nam shelved the  pentavalent vaccine   because it had been associated with 12  deaths.  However, in both cases, the WHO teams which investigated the deaths declared they were ‘unlikely’ to be related to the vaccines used.

The authors point out that the consequences of using the new classification are illustrated starkly in the causality assessment of 132 serious AEFI cases uploaded on the website of the Ministry of Health and Family Welfare in India. 78 of these babies survived and 54 died. Among those who survived, the causality assessment shows nearly 50%, were reactions to the vaccine.  On the other hand not even one death was classified as vaccine related.  96% deaths were simply classified as unclassifiable or coincidental.

“The resulting paradox is evident,” Puliyel and Phadke point out. “If a child is admitted to hospital with intractable convulsions after vaccination, if it survives, the reaction could be classified as vaccine-product–related, but if it dies it will be classified as ‘coincidental death’”.

WHO has redefined ‘cause and effect’ in AEFI. According to the revised AEFI Manual, the term ‘causal association’ refers to “a cause and effect relationship between causative factor and a disease with no other factor intervening in the processes”. This would mean that AEFI in children with an underlying heart disease who may develop symptoms of cardiac de-compensation after vaccination (due to a vaccine-caused elevation in temperature or stress from a local reaction at the site of vaccination), would not be considered causally related to the vaccine although vaccination contributed to cardiac failure in this specific situation.

This is of particular concern since the Global Advisory Committee on Vaccine safety documented that a large number deaths in children after receiving Pentavalent vaccine were those with some pre-existing heart disease, the authors say.

“The new definition of ‘cause and effect’ is potentially harmful to children with underlying diseases as it removes the impetus to provide them special care during immunization,” the authors note.

“In view of the above, it is necessary that the WHO’s  AEFI manual be reevaluated and revised urgently” the authors said  pointing out that AEFI reporting is meant to ensure that vaccines given to children are safe.

“Safety of children (child safety) rather that safety for vaccines (vaccine safety) needs to be the emphasis,” the authors point out.  “Also many ambiguities in evaluating AEFI under the new classification scheme erode confidence in the scheme’s ability to evaluate rare adverse events and act decisively to protect children.” (END)